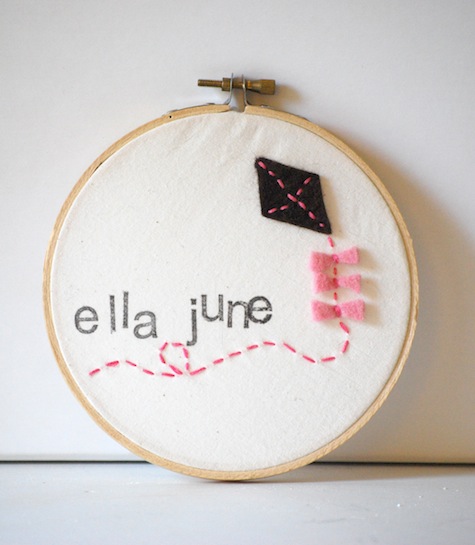 Let me start by saying I'm no embroiderer. In fact, I haven't really a clue as to any specific stitches or knots. I do however LOVE the look of modern embroidery. For years I've been holding on to a few hoops that I picked up a the thrift store, but my lack of knowledge on the art has kept me from doing anything with them. A few weeks ago I bought an assorted box of embroidery thread for a felt food project I'm working on (more about that later). I decided to go for it, and try my hand at making something with the hoops.

Originally I wanted to embroider Ella's name but because I'm no pro I just decided to stamp her name with black ink on the linen before putting it in the hoop. I actually like the look. It gives nice contrast and adds a different texture to the project. I think it also help keeps it modern and not so "grandma-ish". Apparently I'm no stamping pro either, my letters are quite off. And I will be honest, I had to stamp her name about 6 times before I got a piece I liked.

You can see I'm really not very good, which is evident in the loopy tail of the kite. It turned out more wonky than loopy. Ella has brown and pink in her room so I cut a little wool felt in those colors to make a kite and tail.

Overall it was a pretty easy piece to do, but I think i'll have to keep practicing this craft. It's fun!

Here is some inspiration to get you going. There really are some amazing things you can do with embroidery!

Hi, I'm Laura. Mama to my little ladies, Ella June + Maci. I like dabbling in all things vintage, handmade, girly and one of a kind. Always on the lookout for a good find. ♥